On February ….. all year 6 students from Carey Kew and Carey Donvale attended a leadership day called “Lead yourself into the future”. Throughout the day we did 4 activities to understand what it means to be a good leader. These activities helped us work together as a team and come up with different ideas that may or may not work. We worked with others to come up with great ideas to try and win the challenge. We did this by using others strengths to figure out a plan to complete the activities.

Firstly, we started off by going off into different groups with each group wearing a specific colour. I was in the orange coloured group with a mix of Kew and Donvale kids. One of the activities was cup stacking. Each group had to see how high they could stack their cups using only string, scissors and rubber bands. When we got all of our materials there was a twist and we found out that the cups cant touch any part of our body or the scissors and string. The cups could only touch the rubber bands making it a difficult task.

During this activity, I learnt about myself that not all of my ideas will always work out, so working in a team helps so others can use their skills to come up with ideas that can support other members in making their idea work. I learnt to challenge myself, not everyting will be easy. Every time we tried a new idea, I was making sure that I never give up. As a team member I learnt to listen to others and allow them to give ideas, even though they may not work out too well and always support my team members. I also learnt to give everyone a chance and share each other’s ideas to make them one big idea.

One of my favourite book chat books was Saving Winslow. This book was a recent book chat.

This book is by Sharon Creech and the genre is animals

I enjoyed this book because it had the right amount of sadness and happiness that I like. I also liked this book because the donkey is a hero. The donkey is hero because he can smell the fire that is next door and because the lady next door hates the donkey the boy goes outside to make Winslow be quite. Then the boy see the fire and gets his parents. I think that it would of been better if the donkey died but that is what I think.

This book is about a little donkey that is born and is very sick and this little boy takes it in and every one is saying that the donkey is going to die. The little boy keeps on looking after it until he has to do something about the donkey.

What is your favourite book and why? 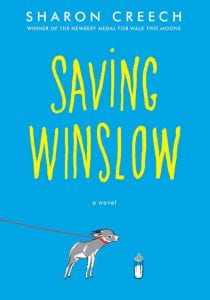 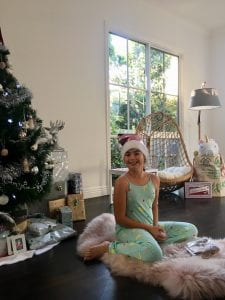 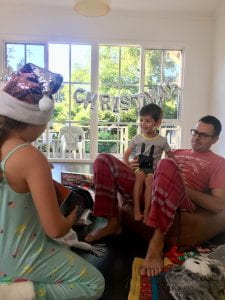 Two holidays that I celebrate are Easter and  Melbourne Cup.

We celebrate Christmas like most of you but it is different in Australia. It is different because it is super hot on Christmas. On Christmas we go to my aunt and uncles house for lunch. They serve lots of food that my uncle made because you should never let my aunt cook. After lunch we do something called a Kris Kringle. Kris Kringle is where you buy a present for someone but don’t say it is from you. My uncles brother always dresses up as Santa with thongs and looks silly.

We celebrate Easter by going to Bright camping ground with our family and friends. We go every year and instead of staying in a tent we stay in cabin. My aunt, uncle, grandma, grandpa, and cousin all go with us. In he cabin there are bunks and I have to sleep on the middle one while my brother sleeps on the bottom one. On Easter Day we do a egg where every one have to bring a certain type of chocolate egg. At the end the eggs get split up equally.

What holidays do you celebrate? 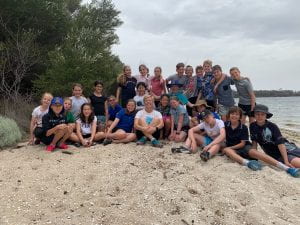 Last week we went to our school camp Toonallook.  It was an amazing experience because we learned a new game called king ball. It is pretty much like four square but four circles and you can bounce the ball at most three times in your circle. We also went bike riding and kayaking when we went bike riding it was just a practice for when we where going to bike ride on Raimen Island. We also went kayaking while the other half was bike riding.  While one half was bike riding on Raimen Island the other half was fishing no one caught any fish but some caught jellyfish. The most challenging time was when we went bike riding on the sand. This was challenging because I couldn’t really control my bike. The P.L.A. i used was imagination. I used this because when me and my friend had free time we had to come up with a game to play. On the last morning we got woken up at 6:00 am to see the sunrise it was so pretty at one point the swans went directly in front of the sun for a perfect photo.

Do you have a school camp? What is it called? 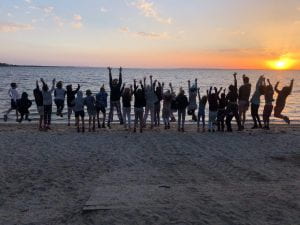 This is my avatar. I used a app called avatar creature to make it. 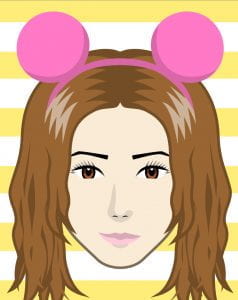 I did brown hair because my hair is brown and I also did brown eyes because that is the closest I could get to my eye colour. I put pink Minnie Mouse ears because I have been to Disneyland. What colour is your hair? 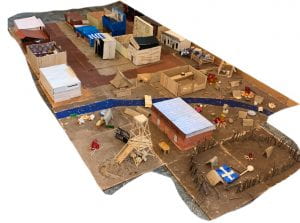 EUREKA! This term for my first camp me and my fellow year 5 went to Sovereign Hill. We had so much fun and when we came back we made a diorama about Sovereign Hill. But we called it our Hard Road Ahead Diorama. Life in the 1850s was hard because when the gold rush hit people where finding the gold so fast that the government had to come up with a licence called the gold licence. When you where mining if you didn’t have a licence or you didn’t pay the amount of a gold licence you 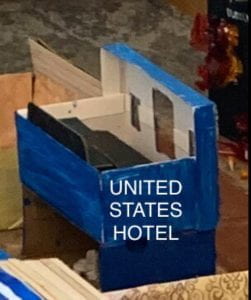 would be tied to a log until you paid for the licence or you would be arrested.

In the 1850s their where quit a few shops. Some of the shops sold dresses, medicine, food, horse shoes, and wood. There are also A  couple hotels one hotel is The United States Hotel. Peter Lalor was an important figure back in the 1850s because he led the uprising in the Eureka Stockade against the administration. Governor Hotham is also important  because he was in command when the Eureka Rebellion occurred.

My building and profession was the United States Hotel. We all got a partner and did a diorama. The United States Hotel was a Hotel  but it also had a bar downstairs. The hotel is conjoined to the Victorian Theatre. Nowadays you can’t stay in the hotel but you can buy drinks.

Some other things I learned and applied to during this unit was maths when we had to do a mapping activity and program robots to go around our diorama. Another thing was writing because we had to make a newspaper article on our building. My newspaper was about a shooting out the front of the United States Hotel. 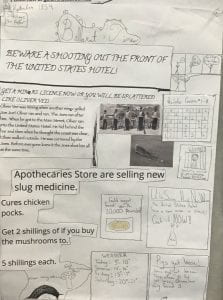 The PLAs I used was Thinking because when I was working me and my partner hit a lot of challenges and we solved the by thinking and imagining what would happen. I also used Relationships because we had to communicate, collaborate and share different ideas.

Some challenges where not knowing what to do. We overcame those by talking and sharing ideas.A major highlight was sharing our dioramas with our parents. I liked this because our parents could see what we worked on. I enjoyed making the newspaper articles and being wanted on one of the articles. I also enjoyed programming the robots it was a bit of trial and error. I would tell people to do what ever they think would look the best and just go with what you know. Something I would do differently is maybe add a bit more detail and things in our diorama. I learned how my partner works and what he is able to do. I also learned who I work well with and who I don’t. My experience was awesome and it was a whole lot of fun making our dioramas and going to Sovereign Hill.

What was your favourite part of our Hard Road Ahead unit? Why? 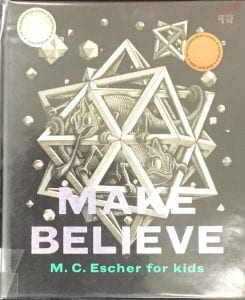 In library we read some short listed books. A few things that make a good information book is realistic pictures that you took because if you didn’t take the photo it’s copyright, clear and good information, and a part that list the sources that you used to find the information. My favourite short listed book was Make Believe. I liked this book because all the optical illusions make you really think. The author makes the pictures real and authentic. He also draws them 3D. I can’t even draw a 3D M.

What was your favourite book? 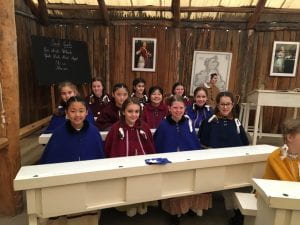 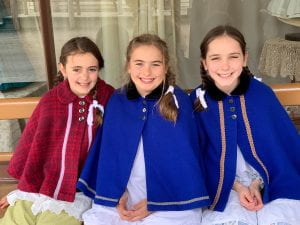 Term three week two. For my first camp year 5 went to Sovereign Hill. It was about a two and half hour drive (which was loud). Me and Keira sat next to each other. One thing that I didn’t know was that in the 1850’s you needed a mining licence in order to mine for gold. My favourite part of camp was doing the school program. I like doing that because work in the 1850’s was way more gripping and fun. Wether when I do work in 2019 it’s boring.

I had such a good time at Sovereign Hill. I hope that you will visit Sovereign Hill and try to do the school program. I bet you would have as much fun as I did. 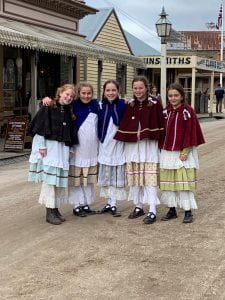 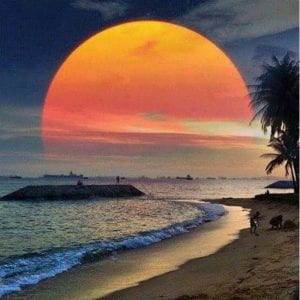 For the term 2 holidays I will be going to California. Me and my dad are already here but my mom and brother are still in Australia. While we are in California I am going to be doing a Stanford basketball camp. It is only our first full day here so we are not doing that much but we are doing some things. The things we are doing today are going to the google office so that my dad can work. I am also doing horse riding after that my awesome babysitter Blanca is taking me to the shops so that I can get some supplies for basketball camp. After she might take me for a swim because it is very hot. 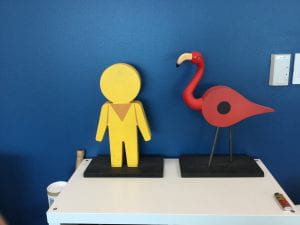 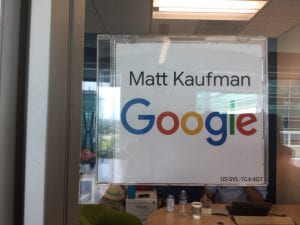